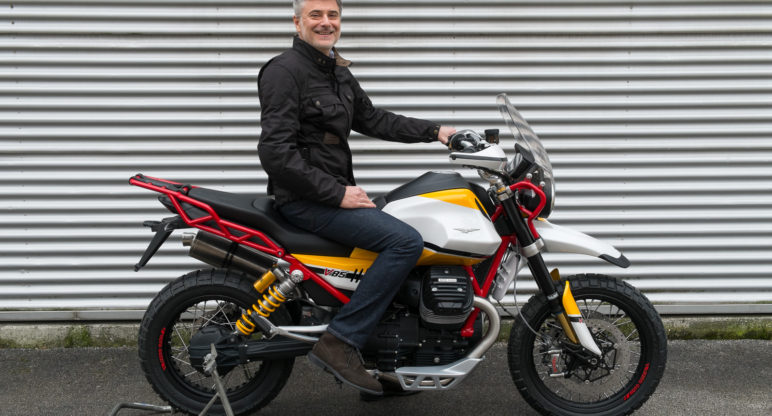 We waited with bated breath for its unveiling at the last Milan Bike Fair. We were blown away by its unique styling that is somewhat unconventional yet intricately interwoven with the identity and history of the Moto Guzzi brand. Then we got excited as we admired its yellow, white and black livery, a tribute to an adventurous and daring racing chapter in the history of the “Eagle”, namely that of the legendary Paris to Dakar.

This is the Concept V85: the latest arrival that stunned everyone and above all fascinated us members of The Clan.

To find out more about it we set off on a mission on behalf of the community to uncover the secrets of the bike’s design by interviewing the guy who first conceived the design: Marco Lambri, Manager of the Piaggio Group Styling Centre, diehard Guzzi fan and member of The Clan, just like us.

1) You’re a member of The Clan and a diehard Guzzi fan. Where did your love for the “Eagle” originate and how did you get to the point of designing the V85?

“I grew up in my father’s workshop, in amongst the engines, and I received my very first bike, a little Malanca 50, as a gift when I was just five years old. Ever since then, my love of two-wheelers has never waned.
However, my passion for the “Eagle” was only really sparked when I was 16 years old and I went on a school trip to visit the Moto Guzzi plant in Mandello. In addition to the production areas, we were also shown the little testing track located behind the plant. It had just stopped raining and the track was still wet. A test rider was out on the track, doing some test laps on a Le Mans III. When he came back in after the test ride, he stopped the bike in amongst us students: the heat coming off the tyres and evaporating the water on the road surface, and the clicking noises caused by the dilation of the bike’s metal components all over the Le Mans made for a truly surreal atmosphere. I was totally gobsmacked and I decided there and then that one day I would work at Mandello and design a Guzzi.

I forget exactly when it was that I sketched my first Guzzi: designing cars and bikes was almost like an illness for me and every day I would come up with a new sketch. My first professional foray into the design world dates back to the period when I worked at the Alfa Romeo Styling Centre. Aprilia had just acquired Moto Guzzi and was looking for designers. I applied for the job and took along some of my design proposals. Thus, a few years and many sketches later, I landed up working on one of the most interesting and stimulating projects that I have ever put pencil to paper on: the V85”.

2) We have already told the story of Moto Guzzi’s Paris to Dakar history on the community website: how much of this legend and of the “Eagle’s” off-roading tradition lives on in this V85?

“The phenomenon of the “classics” and the return to certain values dating back to the early days of biking have become far more than just a passing fad. It is the expression of a new kind of biker with very different demands: a rider that is very particular about the look of his bike and wants to be able to express himself through it. But these days, the “Classic bike” sector too often sacrifices practicality in favour of pure image, particularly when it comes to off-road bikes. The V85 instead combines the all the values of riding in style with those of practicality. Whatever the case may be, I personally consider the V85 to be a truly modern bike. We like to call it a “classic” because it embodies all those values that we believe are timeless, and therefore also classical, for every biker. The bike is actually very simple in terms of structure, robustness and ease of use. It has no non-essential bells and whistles whatsoever and it harks back to the spirit of the earliest Enduro bikes of the 1980’s, the kind of bikes on which you could go anywhere and do anything, including going to and from work, weekends at the lake or going on a summer holiday.

Moto Guzzi’s off-roading history is full of inspirational examples, from the Lodola Regolarità through to the TT and NTX series. Simple, practical bikes that were the expression of Italian-ness and virtually unstoppable on any terrain. The V85 has picked up on this legacy and dressed it up with a unique brand of charm that comes down directly from another chapter in Moto Guzzi’s off-roading history, namely that of the legendary Paris to Dakar.

The prototype unveiled in Milan is clearly intended to be a nod to the Moto Guzzi V65 TT that Claudio Torri rode in the 1985 Paris to Dakar race, particularly in terms of the graphics. We felt that this was a bike with the perfect spirit to introduce the “classic Enduro” concept and also to highlight Moto Guzzi’s off-roading origins.”